The two most important elements of sculptural design are mass and space, of course separable only in thought. All sculpture was made of a material substance that has mass and exists in three-dimensional space. The mass of sculpture is thus the solid, material, space-occupying bulk that is contained within its surfaces.

Space enters into the design of sculpture in three main ways:
01. The material components of the sculpture extend into or move through space;
02. They may enclose or enfold space, thus creating hollows and voids within the sculpture;
03. They may relate one to another across space. Volume, surface, light and shade, and color are supporting elements of sculpture. 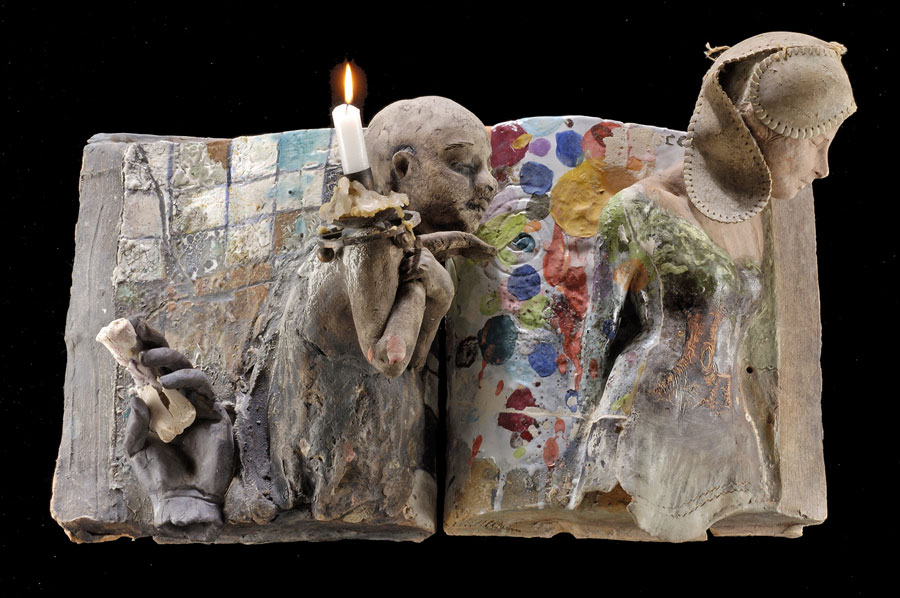 The amount of importance attached to either mass or space in the design of sculpture varies considerably. In Egyptian sculpture and in most of the sculpture of the 20th-century artist Constantin Brancusi. For example, mass is paramount, and most of the sculptor’s thought was devoted to shaping a lump of solid material. In 20th-century works by Antoine Pevsner or Naum Gabo, on the other hand, mass is reduced to a minimum. Sometimes consisting only of transparent sheets of plastic or thin metal rods. The solid form of the components themselves is of little importance. Their main function is to create movement through space and to enclose space. In works by such 20th-century sculptors as Henry Moore and Barbara Hepworth, the elements of space and mass are treated as more or less equal partners.

It is not possible to see the whole of a fully three-dimensional form at once. The observer can only see the whole of it if he turns it around or goes around it himself. For this reason it is sometimes mistakenly assumed that sculpture must be designed primarily to present a series of satisfactory projective views. And that this multiplicity of views constitutes the main difference between sculpture and the pictorial arts, which present only one view of their subject. Such an attitude toward sculpture ignores the fact that it is possible to apprehend solid forms as volumes, to conceive an idea of them in the round from any one aspect. A great deal of sculpture is designed to be apprehended primarily as volume.

A single volume is the fundamental unit of three-dimensional solid form that can be conceived in the round. Some sculptures consist of only one volume, others are configurations of a number of volumes. The human figure is often treated by sculptors as a configuration of volumes, each of which corresponds to a major part of the body, such as the head, neck, thorax, and thigh.

Holes and cavities in sculpture, which are as carefully shaped as the solid forms and are of equal importance to the overall design, are sometimes referred to as negative volumes.

The expressive character of different kinds of surfaces is of the utmost importance in sculpture. Double-curved convex surfaces suggest fullness, containment, enclosure, the outward pressure of internal forces. In the aesthetics of Indian sculpture such surfaces have a special metaphysical significance. Representing the encroachment of space into the mass of the sculpture. Concave surfaces suggest the action of external forces and are often indicative of collapse or erosion. Flat surfaces tend to convey a feeling of material hardness and rigidity. They are unbending or unyielding, unaffected by either internal or external pressures. Surfaces that are convex in one curvature and concave in the other. It can suggest the operation of internal pressures and at the same time a receptivity to the influence of external forces. They are associated with growth, with expansion into space.

Unlike the painter, who creates light effects within the work, the sculptor manipulates actual light on the work. The distribution of light and shade over the forms of his work depends upon the direction and intensity of light from external sources. Nevertheless, to some extent he can determine the kinds of effect this external light will have. If he knows where the work is to be sited, he can adapt it to the kind of light it is likely to receive. The brilliant overhead sunlight of Egypt and India demands a different treatment from the dim interior light of a northern medieval cathedral.

Then again, it is possible to create effects of light and shade, or chiaroscuro, by cutting or modeling deep, shadow-catching hollows and prominent, highlighted ridges. Many late Gothic sculptors used light and shade as a powerful expressive feature of their work. They aiming at a mysterious obscurity, with forms broken by shadow emerging from a dark background. The sculptors from Greek, Indian, and most Italian Renaissance shaped the forms of their work. And making them to receive light in a way that makes the whole work radiantly clear.

The colouring of sculpture may be either natural or applied. In the recent past, sculptors became more aware than ever before of the inherent beauty of sculptural materials. Under the slogan of “truth to materials” many of them worked their materials in ways that exploited their natural properties, including colour and texture. More recently, however, there has been a growing tendency to use bright artificial colouring as an important element in the design of sculpture.

In the ancient world and during the Middle Ages almost all sculpture was artificially coloured, usually in a bold and decorative rather than a naturalistic manner. The sculptured portal of a cathedral, for example, would be coloured and gilded with all the brilliance of a contemporary illuminated manuscript. Combinations of differently coloured materials, such as the ivory and gold of some Greek sculpture, were not unknown before the 17th century; but the early Baroque sculptor Gian Lorenzo Bernini greatly extended the practice by combining variously coloured marbles with white marble and gilt bronze.

Now you are in the blog Elements of Sculptural Design.

Know more about the Sculpture.

The Next: PRINCIPLES OF SCULPTURE DESIGN